Editor’s note: This post previously appeared on the Transparify Blog.
They were kind enough to let us re-post it on the IR blog. 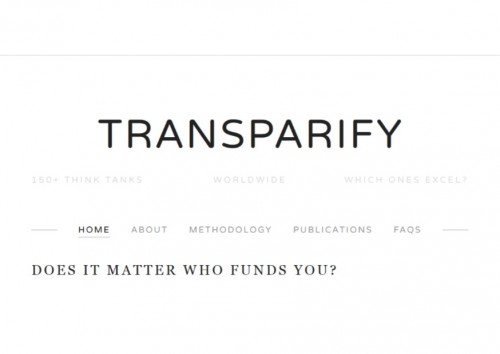 The ‘think tank’ label still evokes notions of independence and the scholarly pursuit of knowledge, and journalists frequently cite think tanks as independent experts without simultaneously disclosing who funds them (a recent online petition laments the practices of the BBC in this regard). Yet in Washington D.C., one can observe a veritable politicization of think tanks, as avowedly ideological institutes now outnumber the more centrist or scholarly ones. With mandatory contributor disclosure not in sight, think tanks with clearly ideological purposes can still grant hidden sponsors full tax deductibility of donations under tax code section 501(c)(3).

For example, in the US it became publicly known in 2010 to what extent the billionaire Koch Brothers fund conservative think tanks. In Europe too, anecdotes of secret corporate funding of institutes staging a sort of counter-expertise are accumulating. For instance, the oil and gas firm Exxon Mobil funded London- and Brussels-based think tanks to deny climate change and depict EU policies as being based on “junk science”. Think tank networks like the Stockholm Network seem to essentially cater to interested business clients. Such stories add to a profound uncertainty about think tanks’ credibility.

Non- or under-reporting of financial details has led to widespread cynicism. Media pundits worry that “secretive think tanks are crushing our democracy”, lumping together all think tanks in the process. But not (fully) disclosing financial details does not necessarily imply malicious intent. Most balanced think tanks may just shy away from the reporting burden, or do not recognize that beyond being a democratic principle, transparency boosts their primary asset: namely, the perception of key audiences that they are intellectually independent and trustworthy. Voluntary disclosure therefore is the single best tool we have for creating a level playing field.

Because think tanks ultimately depend on this to survive and thrive they should lead by example. Annually disclosing details on who exactly funds their work is not just a sign of professionalism. It must become a strategic priority for think tank leaders worldwide to make such information available on their websites, and within initiatives such as the European Commission and European Parliament’s joint Transparency Register (where over 300 think tanks have registered so far, thereby endorsing its code of conduct). Of course, voluntary disclosure is no perfect remedy, as it is vulnerable to gaming (selective disclosure) or donor capture (anticipatory obedience) in practice.

With think tanks’ rising influence come higher expectations for responsibility. As with Odysseus binding himself to his ship’s mast, think tanks only stand to gain from transparency. Voluntary disclosure is a small step for a think tank, but one giant leap for the credibility of the craft.