Peer Steinbrück, the Social Democratic challenger to chancellor Angela Merkel in the upcoming election, gave a speech at Freie Universität Berlin on Tuesday. You can watch it online (in German). This was not meant to be a typical campaign talk, but a speech on the “guidelines of social democratic foreign and security policy”.

The speech was disappointing. For people familiar with the issue area, in particular the first half of the speech seemed very much rooted in the general wisdom, or rather, the commonly shared worries about the state of the world. Steinbrück failed to clearly distinguish his position from vague and all too familiar boilerplate statements. Europe is important for Germany and a historic achievement that should be cherished. International law and the UN Security Council must be considered in decisions about employing the German army. Drones that kill people are undesirable. Oh my, who would have thought?

Steinbrück was unable to clarify how and why his positions represent social democracy, let alone an alternative to Merkel-style realpolitik. His dismissive response when asked about this weakness: “If a social democrat gives a speech, than this a speech about social democratic positions.” Well, what might these positions be? END_OF_DOCUMENT_TOKEN_TO_BE_REPLACED 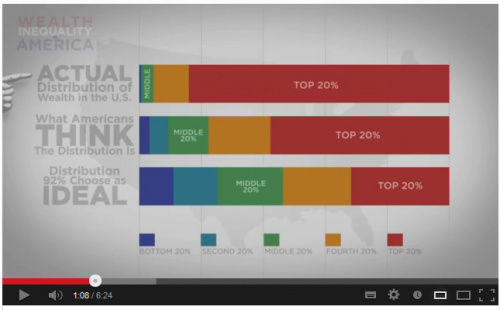 I have two problems with this six-minute clip. First, it does not sufficiently explain the underlying data: The poll results are not as clear as it seems, and the video lacks comparisons to other countries. Second, more importantly, the clip fails to acknowledge that wealth is almost per definition distributed in a highly unequal way. END_OF_DOCUMENT_TOKEN_TO_BE_REPLACED