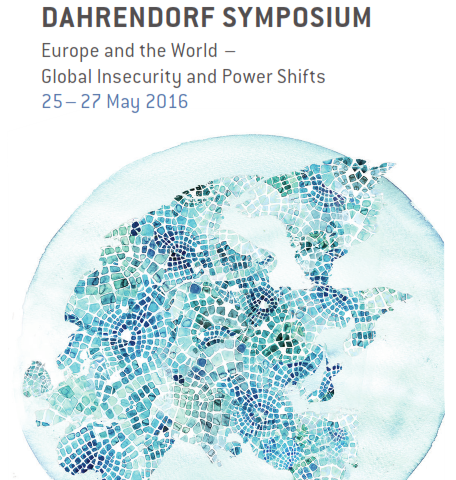 Last week I had the pleasure of attending (parts of) the 2016 Dahrendorf Symposium hosted by Hertie School of Governance, LSE and Mercator foundation. The event focused on European foreign policy. I will summarize the debates on the final day in a separate blog post.

A few months ago, Hertie School hosted a scenario planning workshop as part of the Dahrendorf project. It focused on the EU’s relations to other world regions, trying to draw up scenarios for the year 2025. Meeting in five different working groups, the participants developed scenarios for the future relations between the EU and the U.S., China, Russia and Ukraine, Turkey, and the MENA region. Given my interest in forecasting and curiosity about scenario planning, I gladly signed up and contributed to the EU/U.S. working group.

At the Dahrendorf Symposium last week, Monika Sus and Franziska Pfeifer (who are coordinating the scenario project) briefly described our method and results to the audience. The publication with our 18 (!) brief scenarios is available via the Dahrendorf blog: European Union in the World 2025 – Scenarios for EU relations

The results are interesting and I really encourage you to download the document! Personally, I particularly enjoyed the process. It was a great exercise to think about  basic assumptions we have about transatlantic relations; to identify key drivers relevant for change; and to come up with scenarios that reflect the most relevant combinations of key drivers taking particular directions.

Let me indulge in a bit of self-promotion and quote the intro to my group’s scenario:

“In the years up to 2025 there will be a situation of balkanised technological regulation in the EU, driven by political debates which emphasise the need to shield national markets and societies against the uncertain effects of technological progress. On the other side of the Atlantic, political leaders will continue to embrace new technologies, with an emphasis on keeping the competitive edge also in terms of offensive capabilities in the cyber and AI realms. Only after a series of trigger events, increasing the pressure on decision-makers, will transatlantic leaders be willing to invest in a new institutional framework to manage the political problems associated with technological progress.” (‘Transatlantic Frankenstein’ scenario)

Then, of course, there was the Dahrendorf Symposium, which included a couple of workshop sessions (that I couldn’t attend) and two round-table panels on the final day. I will put my summary of these discussions into a separate post.