Since 1997, the American Academy in Berlin has awarded the annual Henry A. Kissinger Prize “in recognition of outstanding services to the transatlantic relationship.” Taken literally, this means that the next recipient can only be one person: Vladimir Putin.

Just a few weeks ago, even the most committed Atlanticists would not have predicted a spectacular comeback for NATO in 2014. At this year’s Munich Security Conference, often dubbed the transatlantic partnership’s “family meeting”, the mood was quite pessimistic. [My detailed conference report, in German, will appear in the next issue of the Zeitschrift für Außen- und Sicherheitspolitik.] The Europeans, and especially the Germans, were upset about the fact that Senator Kerry gave a speech about the “transatlantic renaissance” without mentioning the NSA affair at all. As some observers noted, the Americans “just don’t listen to us anymore, they only listen in.”

On the other hand, the U.S. representatives were frustrated that the Europeans were not eager to discuss other topics they deemed more relevant. Again, the old burden-sharing debate resurfaced – but with more urgency. In contrast to earlier debates, the U.S. administration has actually followed through and significantly reduced their troops in Europe while ramping up their forces in the Asia-Pacific (the “rebalancing” FKA “the pivot to Asia”). Quite symbolically, after 69 years, the last Abrams tanks left European soil in 2013, which many saw as a “historic moment”. [It should be noted, however, that a number of refurbished Abrams tanks have returned to Germany in 2014.]

Under Obama, the United States has made clear that it does not expect to lead every military mission the transatlantic partners undertake. In Libya, the Europeans had to realize that they lacked the capabilities to run an intense air campaign alone. In early 2013, when the Europeans discussed the crisis in Mali, NATO’s Deputy Secretary General, Alexander Vershbow, bluntly stated: “The US and NATO cannot be everywhere.”

In earlier years, U.S. politicians would have been furious if the Europeans had planned for an operation without the United States. But the new message was: Europe, it’s your job, get used to it. Yet, given that these debates were about “wars of choice” in a “post-interventionist era”, few Europeans pushed for a major overhaul of Europe’s defense planning – much to the dismay of Washington.

Waiting for the “transatlantic renaissance”

It didn’t help that a conversation between Victoria Nuland and a U.S. ambassador was leaked, in which the Assistant Secretary of State for European and Eurasian Affairs used the F-word in respect to the EU. Ironically, Nuland is one of the few remaining committed transatlanticists in Washington and had coined the notion of a “transatlantic renaissance”. Now, that whole concept seemed to be a non-starter.

Enter Vladimir Putin. Thanks to the Russian annexation of Crimea and the ongoing threats from Moscow, the transatlantic partnership, and with it NATO, is back again.

With his actions in the past few weeks, Putin has actually provoked what he had successfully avoided for a long time: the rapid rapprochement of NATO members’ policies towards Russia. He might not have provided a “solution” to one of the core challenges in the internal debate about the Atlantic Alliance in the twenty-first century: How do we define our relations with Russia? But at the very least, he has made a new consensus among NATO member states much more likely.

Without doubt, Russia still is the most important “Other” for NATO, and the question of how to evaluate this special in-group/out-group relationship received different answers in the capitals of NATO’s members.

For some researchers, Trine Flockhart and Sten Rynning, among others, NATO’s development in recent years was shaped by two camps within the Alliance. One group (led by the U.S., the United Kingdom, and Denmark) advocated for a global NATO tackling new security risks and reaching out to partners across the globe. They saw Russia as a declining power, sometimes as a necessary partner, but often as a spoiler. The other camp still thought of NATO as a “regional bulwark”, centered on Art. 5. For these countries (including Poland and the Baltic States), Russia was still a potential threat, in particular after the Russo-Georgian war, in which Moscow, from their point of view, had shown its true colors.

In NATO’s New Strategic Concept of 2010, the two camps tried to bridge their views (“Active Engagement, Modern Defence”), agreeing or willing to compromise on many other issues. Yet, as I argue in my dissertation, NATO’s “lowest common denominator” Russia policy was in fact defined by a third group within NATO that opposed both visions without actually putting forward their own: the Germans, the French, and other Western Europeans instead thought of Russia as a “partner”.

This third group justified their arms sales to Russia by pointing to the wording of a number of NATO declarations: If Moscow is our “strategic partner”, the argument was, why can’t we sell them weapons? For a long time, they had also blocked defense planning for the Baltic States: Why should we make plans, they argued, for an invasion by our partner? This would only create new tensions. And they fought NATO’s open-door policy, fearing that it would alienate Moscow and undermine all efforts to develop a real partnership with the Russian Federation.

“Partnership” is no longer an option

Putin’s recent moves have been a “game-changer” for the internal NATO debate. Basically, he deprived his best friends within NATO of their arguments. Who is able to argue now that Moscow is a partner? Who can really make the case that defense planning for a major conflict in Europe is unnecessary, when Russian politicians express their worries about Russian minorities in Estonia using the same formula that served as a justification for the Crimean operation or assemble massive forces at the Ukrainian border? Clearly, after years of trying to “divide and rule”, Putin’s policy has now resulted in “rule and unite”.

The consequences are visible. Germany, for instance, has stopped a big arms deal for Rheinmetall that had been heavily criticized by other allies, but defended by Berlin for some years. Imagine how it would look like now if the Bundeswehr and Rheinmetall actually trained Russian forces on a super modern combat training facility… The German government in the end had no choice but to intervene. France, whose government had defended the sale of their Mistral carriers to Russia in a similar way, is now under pressure to review its decision. Foreign minister Fabius indicated that Paris might reconsider it. France, the United Kingdom and the United States have already offered to send additional fighter jets to the Baltic States.

Even the seemingly dead open-door policy is back on the agenda since an old question has popped up again: What can NATO do to reign in potential Russian aggression? In any case, demand for NATO membership is already increasing. Not just in Eastern Europe, but also in some of NATO’s best partner countries such as Sweden or Finland, in which Moscow’s actions have triggered a new debate about a possible application for NATO membership. To be sure, member states still disagree about the added-value of another NATO expansion. Yet, Putin’s actions have changed the playing field for the intra-NATO debate on the issue. 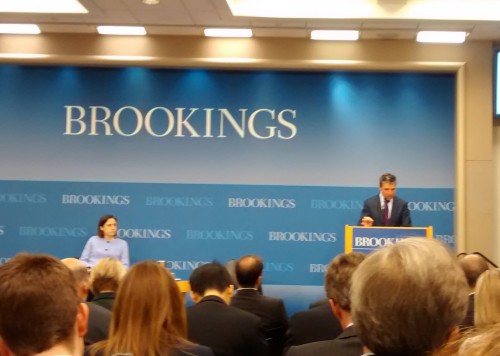 Anders Fogh Rasmussen, now in his final months as NATO Secretary General, has seized the opportunity to build momentum for transatlantic unity and a clear response to Moscow. For some insiders and “NATOniks”, he looks more energetic and determined than ever before. Speaking at the Brookings Institution last week, he defined the new relationship between NATO and Russia and what distinguished “us” from “them”:

There are no quick and easy ways to stand up to global bullies because our democracies debate, deliberate, and consider the options before taking decisions, because we value transparency and seek legitimacy for our choices and because we see force as the last, not the first, resort. The only way to address such challenges is for Europe and North America to stand together.

For many in the transatlantic community, Putin has made it much easier to see themselves as part of this “in-group” of democracies, in which a “global bully” just cannot belong. The many transatlantic disagreements notwithstanding, Putin’s actions spotlight what unites the transatlantic partners. If Anders Fogh Rasmussen could nominate a person for the Henry A. Kissinger Prize and wanted to be honest, he would have just one choice: Vladimir Putin, the unexpected Atlanticist.

[Thanks to Mathis for helpful comments (and for nicely asking me to write it in the first place) and to our cartoonist!]

1 thought on “Putin, the Atlanticist”