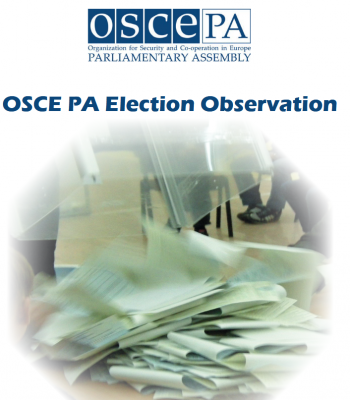 Since 1993, the Parliamentary Assembly of the Organization for Security and Cooperation in Europe (OSCE) has sent observers to more than 150 elections in its member states. This reflects a broader trend: Election observation missions (EOMs) have become very popular among international organizations, as we found out in a collaborative research project. This year marked the first time that parliamentarians from the OSCE states observed a federal election in Germany.  Eager to get a first-hand look at EOMs in practice, I signed up to accompany one of the teams in Berlin (and act as interpreter if needed).

During election day, our group visited a good number of polling stations in the Charlottenburg-Wilmersdorf district. At each stop, the observers asked a set of questions: How many voters are registered, how many have voted so far, did anything out of the ordinary happen? We then usually stayed for a while and observed the voters come and go; while the morning was relatively quiet, we saw significant traffic in the afternoon (overall turnout was 76%).

Things I learned about elections in Germany

All polling stations were similar, which should not come as a surprise given Germany’s reputation as obsessed with rules and procedures. We still saw some interesting deviations. Some polling stations were set up in spacious rooms while others felt overcrowded. The smaller and less accessible locations were also those in which the volunteer staff was under more stress and the lines were much longer.  It seems pretty trivial to point out that polling places should offer sufficient space, but apparently this is an issue even in a country as rich as Germany. (Side note: Even in the most crowded place, nobody was complaining. “We have to work with what is available”, one staffer told us.)

The volunteers running the polling stations (usually in teams of eight) were focused, well-organized and friendly. Still, some teams were more efficient than others when it came to double-checking voter records and setting up the room in the most favorable way. This suggests that the pre-election briefings held by the election authorities could be a little more practice-oriented.

In addition, a few of our interview partners were surprised to be visited by observers, sometimes to the point of being suspicious. In the most memorable moment of the day, we were led to a small room to await further instructions; it almost felt like an interrogation as depicted in spy novels, only that it happened in a German primary school. I guess the lesson here is that future briefings should mention the concept of EOMs and the existence of the OSCE…

What’s the point of observing elections in a consolidated democracy?

Election observation missions are only conducted with the consent of the respective government. The German federal government invited the OSCE Office for Democratic Institutions and Human Rights (ODIHR) in 2009, 2013 and 2017. But why send teams to one of most consolidated democracies among its 57 member states? In their 2017 pre-election “needs assessment” report, the OSCE experts mentioned campaign finances and the neutrality of media reports as potential issues — but strongly expressed their overall confidence in the electoral process. In contrast to 2009 and 2013, the OSCE Parliamentary Assembly then chose to send a full-fledged delegation.

In the IR literature, it has been noted that international observers have become a fixture of elections around the world. Judith Kelley has argued that “once many honest governments had invited monitors, not doing so became a self-declaration of cheating”. Even for those intending to cheat, it might be more rational to invite observers and risk being caught than to face blanket criticism for the lack of transparency. Election observation thus triggers interesting cost/benefit calculations for individual states.

For front-runners, such as Germany in the case of elections, opening themselves to scrutiny strengthens claims to moral leadership. Assessing all group members in the same way also counters accusations of double standards. But what happens if observers find even minor shortcomings in the procedure of self-proclaimed leaders? The laggards in the group could now point out that nobody’s perfect and accuse their critics of hypocrisy. Moreover, autocratic states could send delegates to participate in election observation abroad, signaling adherence to democratic norms without incurring real costs.

It seems important to go beyond individual cost-benefit calculations and rather consider the group dynamics of peer review and potential norm internalization. Peer review is often used in international forums: not just regarding democratic elections, anti-corruption and other governance issues, but also with respect to more technical implementation issues.

My day with the OSCE leaves me wanting to learn more about signaling, reputation and peer pressure in the context of heterogeneous groups.