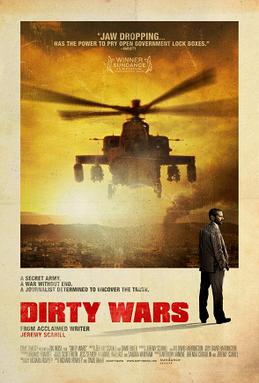 As the war on terror/ “nation-building” exercises in Afghanistan and beyond seem like a fact of life at this point, we’re probably due for an update.

Luckily for us, this year’s Oscar nominated Dirty Wars (based on Jeremy Scahill’s book of the same name) gives us a chance to get reacquainted with the topic. The film focuses on Afghanistan, Yemen and Somalia, where Scahill investigates the US’s (sometimes poorly) targeted strikes against individuals on ever-expanding kill lists. While the film features close-ups of Scahill’s concerned looking face a bit too much for my taste, it’s worth watching, especially for the scenes in Somalia, where Scahill meets warlords now being armed and paid by the US to fight al-Shabab (Sound familiar?).

Scahill’s “discovery” of JSOC makes the film feel a bit dated, but their operations are, of course ongoing, and causing civilian casualties.

It seems we’ll likely be hearing even more about this in the future, as the AP is reporting that most of Snowden’s documents contain information on US military operations

Scahill’s film gives some indication why the US may not be winning hearts and minds, and the January 17 attack on a Kabul restaurant favoured by expats and aid workers reinforces the point that nation-building is hard, complicated, and dangerous if you’re an aid worker (or a citizen of the nation being “built”):

Indeed, development work in Afghanistan appears to be headed toward a crisis, even without the impending withdrawal of foreign troops. The last years have been witness to an increase in drug addiction, a rise in child malnutrition, increasing violence against women, and a stagnant life expectancy (the average
Afghan is not expected to celebrate his or her 50th birthday). With a median age of a mere 18 years, Afghanistan is brimming with youth but suffering a barren job market. The need for humanitarian assistance has never been greater, and the environment never more perilous.

This seems to be the take-away in Britain, as the government, faced with voters who are tired of foreign wars, is cutting military jobs.

However, despite the challenges, Germany is looking towards new foreign engagements in Africa