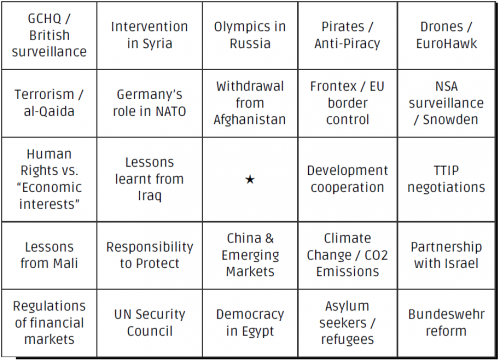 On Sunday, September 1st, all major TV channels in Germany will broadcast the first (and only) “duel” between Angela Merkel and her challenger in the upcoming federal elections, Peer Steinbrück. As we have criticized in a previous post, both are not exactly known for their visionary positions on foreign policy.

Nonetheless, we will make sure to watch the show. In particular, we’ll pay close attention to any mentions of foreign policy and international affairs.

And to make things more interesting, we suggest you gather a group of friends for a round of “German foreign policy bingo”! We’ve come up with 24 topics that could be featured in Sunday’s debate and created a set of randomized bingo sheets. Please download, print, and share them with your friends:

PS. For added fun, turn this into a drinking game! Take a shot for every topic that is mentioned, and prepare a bottle of champagne for the lucky winner (in case the candidates actually talk about foreign policy enough to fill a row on the card).

PPS. Think we missed an important topic? Just create your own version (and share it in the comments if you like)! Our word list for convenient copy & paste: