Since April 2014 I have been a member of the NATO Emerging Leaders Working Group, a project run by the Atlantic Council. The group, consisting of 15 diplomats, scholars, and business leaders under 35, was one of three groups tasked to develop recommendations to the NATO Secretary General in the run-up to the Wales Summit in September 2014. In mid-June, we presented our ideas in Brussels. You can find more information about the three reports here.

In order to keep the discussion going and involve more (young) people we decided to experiment with the idea of a Twitter debate. I had hoped that – given the support by some partners including the Atlantic Council and its blog NATOSource as well as Chatham House – we would bring together a number of people interested in discussing some of the topics we raised in our report. Nonetheless, I have been quite surprised that it turned out so well when we launched our first debate yesterday. The debate dealt with NATO and its relationship to Finland and Sweden, two countries that are members of the EU, but not of NATO, and have often contributed more to NATO missions than some allies. In the report we suggested NATO offer them a fast-track membership option. Now we wanted to know what people in Finland and Sweden thought about it. Would such a public offer be seen as constructive for triggering a more intensive domestic debate or would it be counterproductive (if considered as interference)? And why did Sweden and Finland contribute so much to NATO missions without being able to count on NATO defending them as non-members (Art. 5).

Of course, we’re still learning (for instance, it might be better to focus on one single question, rather than a set of questions; it might also be helpful to have a short blog post as a starter instead of a number of background articles on our Facebook page), but my feeling was that many enjoyed the debate and learned new facts and discussed aspects they had not been aware of before. And I got to “know” a few new people working on similar topics… A sort of “summary” can be found below.
As the Atlantic Council staff told us, the debate had 2,463,736 impressions reaching 339,471 accounts, with 231 users posting 712 tweets. Not too bad a start I would say.

Next week, we’ll discuss the (in)famous 2 % target for defense spending. 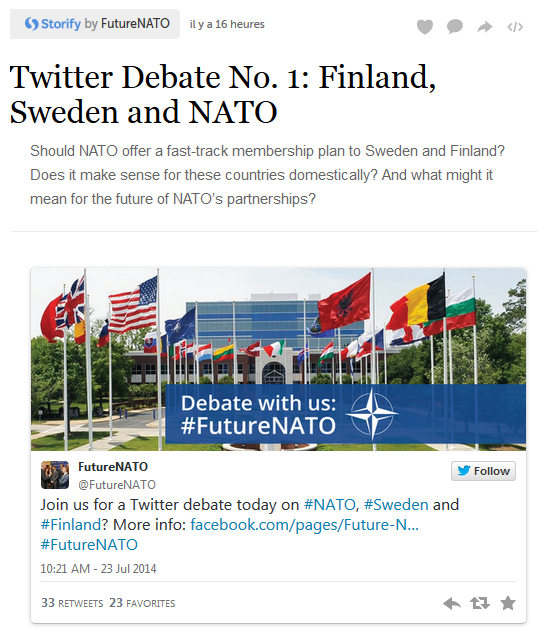 Please check out the summary of our debate.

Additional discussions will be announced via @FutureNATO and on the respective Facebook page.