On Friday, German-Iranian writer Navid Kermani gave a speech in German parliament. His remarks were part of a longer ceremony to celebrate 65 years of the constitution (Grundgesetz).

Kermani’s powerful speech [here, in German] focuses on the unique role played by the 1949 constitution in the German language area, “comparable maybe only to the Lutheran bible”. He shows how elegantly designed and politically consequential several parts of the Grundgesetz were at their time (and still are). Equality before the law, and between women and men, for example.

Overall, the speech makes an excellent case for what Germans call Verfassungspatriotismus: patriotism based on pride in our constitution. One aspect of the speech, however, was meant to provoke – and promptly led to criticism.

Kermani sharply criticized GG §16a, which deals with the right to asylum. The initially very short paragraph was amended in 1993, and now the right “is practically abolished” according to Kermani.

Others were quick to point out that Germany is in fact the European country receiving the most requests for asylum.

Considering that there might be more debates on this issue in the future, I collected some data from Eurostat. The table below shows: 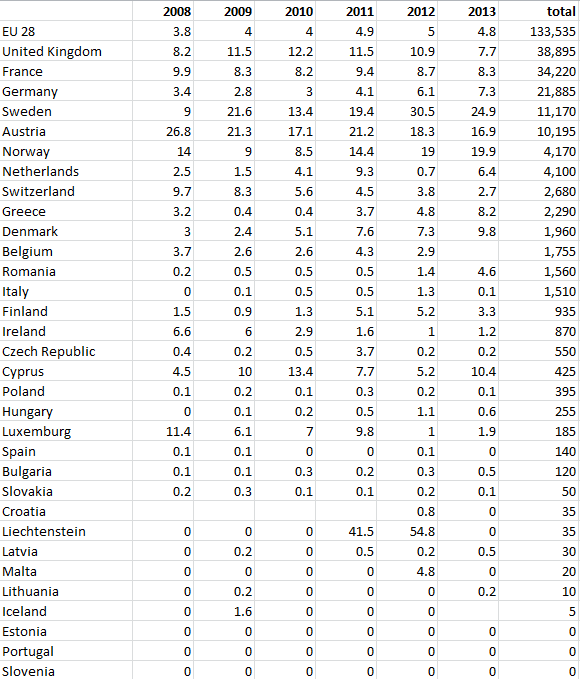 As you can see, Germany accepted 7.3 asylum seekers per 100,000 inhabitants in 2013, but was clearly below the EU-28 average in earlier years. Germany was the #3 host country over the last six years. But others are much more generous: Sweden, Austria and recently Norway come to mind, as does tiny Cyprus. But the UK and France in particular have a far more generous record than Germany, both in total and in relative terms.

In case someone wants to play around more, here’s my quick and dirty data file (MS Excel). I recommend two Eurostat documents on the topic: Country-specific figures 1998-2011 (including information on how many requests were rejected versus accepted) and a brand new report on the 2013 developments. Both could help to create a more instructive comparison.

I’d also be interested in links to articles on this topic.

While other IR associations have included and highlighted junior scholar work in their annual conferences only recently, such as the ISA’s junior scholar symposium, the German Political Science Association has already set up a junior scholars’ conference quite some time ago. Ever since 1994, junior IR scholars in and from Germany have met for their very own conference every two years. The 11th IB Nachwuchstagung will take place this coming weekend. END_OF_DOCUMENT_TOKEN_TO_BE_REPLACED